These stars headed to the altar together more than once

The singer renewed his vows with wife Smith in April 2022 in an elaborate, red-themed Las Vegas soirée.

NE-YO and Smith, who first tied the knot in 2016, shared numerous photos and videos from their big day on Instagram, including a romantic video of the couple enjoying time together in a hotel suite.

"This weekend means the world to me. Everything that it's about, everything that it is, and the fact that I get to do it with you," Smith said in the clip. "I love you forever and always. A million times, a million years, I always choose you."

The parents of three, plus NE-YO's son from a previous relationship, announced they were divorcing in February 2020, though mended their marriage during the early days of the COVID-19 pandemic.

"The whole quarantine thing was kind of a blessing," NE-YO told The Talk in June 2020.

Olympic track star Felix celebrated her marriage to husband Ferguson with a vow renewal ceremony on Oct. 17, 2021. The couple's 2-year-old daughter Camryn adorably served as the flower girl for the big day.

ESPN journalist Ramona Shelburne posted footage from the sweet ceremony to Instagram, showing Camryn walking down the aisle, Felix making her entrance down a grand staircase and the happy couple holding hands and jumping as their guests cheered.

"Two of my favorite people @allysonfelix and @supermanferg renewed their vows today and it was more beautiful than these photos can capture," Shelburne wrote.

The chef revealed on Instagram that over the summer her NBA player husband Curry planned a surprise vow renewal ceremony to celebrate their 10th wedding anniversary.

"A couple of weeks ago @stephencurry30 surprised me with the most beautiful vow renewal ceremony," Ayesha wrote on Instagram. "He even picked out my dress for me and had it waiting 😭."

She continued, "Our big girl Riley officiated and Ryan and Canon walked me through the grass of our backyard." (Ayesha and Stephen share three children together: son Canon W. Jack and daughters Ryan Carson and Riley.)

After meeting for the first time at the altar in 2014 on Lifetime's Married at First Sight (produced by Kinetic Content), Jamie Otis and Doug Hehner — who welcomed daughter Henley Grace in 2017 — secretly renewed their vows in Curaçao at the Santa Barbara Beach and Golf Resort in April 2019.

"Jamie and I wanted to take some time to celebrate how far we've come personally and emotionally and reflect on the time we spent together," Hehner told PEOPLE. "Five years is a very big deal!"

Shortly after son Psalm's birth, Kim Kardashian and Kanye West renewed their vows in honor of their fifth wedding annivesary, as seen on Keeping Up with the Kardashians.

The intimate ceremony, which was not filmed for E! cameras, was held in the couple's backyard with family members in attendance, including Kim's sisters Khloé, Kourtney and Kylie.

In February 2021, PEOPLE confirmed the stars were ending their marriage.

Five years after they tied the knot, Florida Georgia Line's Kelley and his wife said "I do" once again.

The couple toasted to their fifth wedding anniversary during a relaxing getaway on the Northern coast of California on Dec. 16, 2018, but the country crooner decided amp up their special day with a surprise wedding vow renewal ceremony at the Post Ranch Inn in Big Sur, California.

"To say those words and make that commitment again — I feel like we do it everyday to each other, and we tell each other we love each other and we show it by our actions — but to kind of have a spiritual little ceremony with both of us, it's just something I think we both needed after an amazing, long year," he told PEOPLE. "What a blessing this year has been and we just wanted to do that for ourselves."

Despite rumors of an impending breakup, Beyoncé and JAY-Z proved their love knows no bounds when they tied the knot a second time in 2014 during a family vacation in Corsica — which just so happened to coincide with Queen Bey's 33rd birthday. In 2018, they appeared to renew their vows again, sharing footage during an On the Run II tour stop in the U.K.

Pinault shocked Hayek when he walked her down the aisle (again) to their vow renewal ceremony during their vacation in Bora Bora at the end of August 2018.

Hayek looked overjoyed while wearing a red gown and carrying a bouquet of white flowers in a photo of the two that she shared on Instagram.

"The summer is coming to an end and my best moment was when my husband surprised me with a vow renewal - it was not what I would have chosen to wear to my wedding but I was told I was going to the spa! #luckyinlove #wedding," she wrote in the caption.

The couple wore flower wreaths and were given a second certificate of marriage that she shared in her Instagram gallery. (They first wed in 2009.)

Hayek playfully threw her bouquet to her then 10-year-old daughter, Valentina, and a group of other women in another photo.

The Rosenbaums, who met and fell in love on The Bachelorette in 2011 and got married in December 2012, renewed their "I do's" on Aruba's Eagle Beach in August 2018 during the Caribbean's largest vow renewal ceremony, dubbed Vow Renewal 2.0.

"There's no where else we'd rather 'renew our I do's' than in Aruba, it's absolutely breathtaking," Ashley said in a statement. "We're overjoyed to have shared this experience with the company of our children, and know this moment in time is one we'll treasure for the rest of our lives. The One happy island is truly magical and romantic!"

In October 2020, the two announced they were going their separate ways after eight years of marriage.

Remy Ma and husband Papoose revealed they were expecting their first child together via Instagram on July 3, 2018, as they shared video and photographs of their vow renewal, which they used to surprise their guests with a baby announcement.

Addressing their wedding guests, Remy said, "Although we told you guys that we were renewing our vows, which we are, we also wanted y'all out here when we told you guys…" she trailed off as she handed the microphone to her husband.

"We having a baby!" Papoose said with his hand rubbing Remy's stomach. That December, they welcomed a little girl.

On Dec. 31, 2017, country singer Kramer revealed that she and her husband, Caussin, renewed their vows in Hawaii earlier in the month after working together to mend their relationship following cheating allegations against the former NFL player. "2017……..you broke my heart, you broke me down, you made me question everything, but damn did you make me strong. You taught me patience, you taught me family was everything. You made me believe not only in myself but the power of forgiveness. You turned me into the women I always wanted to be," she wrote on Instagram, alongside photos of the couple's romantic vow renewal ceremony.

Kramer filed for divorce in April 2021 after Caussin again "broke her trust," a source told PEOPLE.

Nearly 20 years after tying the knot, David revealed he and wife Victoria renewed their vows. In an interview with BBC Radio 4's Desert Island Discs for a special 75th-anniversary edition, the soccer star opened up about the special ceremony. "We have renewed our vows since [our first wedding]," said David, who didn't elaborate on when the ceremony took place. "It was a lot more private, about six people there in our house."

The Baldwins certainly brought the sparklers ahead of Independence Day weekend in June 2017. The couple celebrated their fifth wedding anniversary by renewing their vows during a private, outdoor ceremony with close friends. "You think, like, once you get married, everything's like, you're done," Hilaria told the Associated Press. "But it's really good to say, 'Hey I'm still in this.' "

Stewart and Lancaster marked 10 years of marriage with a vow renewal at their Essex, England, home, HELLO! magazine reported in July 2017. "Penny is my whole world. What a girl," Stewart told the publication following the event. "Love means many things to many people but to me it's wanting to share everything with the one you love and I love Penny more now than ever, if that is at all possible."

The How to Get Away with Murder star shared a "Happy Valentine's Day!" snap of herself in 2016, taking fans inside her weekend vow renewal ceremony with Tennon, her husband since 2003. The shot was accompanied by the John Updike quote: "We are most alive when we're in love."

Almost two months before their 35th anniversary on July 4, 2017, the Osbournes renewed their wedding vows in Las Vegas on Mother's Day — following their brief split after reports surfaced that Ozzy had an affair with his hairstylist. "For me, this was actually our real wedding day," Ozzy told HELLO! Magazine about the intimate ceremony. "This is the one that I will remember. Sharon and I have been through so much, and this honestly feels like a new beginning."

Although they originally tied the knot in a small courthouse ceremony in 2005 to avoid paparazzi, Damon and his wife renewed their wedding vows in front of 50 family and friends on the Caribbean island of St. Lucia in 2013. "It's nice to say your vows in front of family," Matt said of the pair's decision to have a second ceremony. "That's the point of taking the vows. These are people who will hold you to them. One of my vows was I gave her the side of the bed closer to the bathroom. And if I don't stick to that, I'm gonna hear about that from my mom, brother and father."

Rimes and Cibrian celebrated their one-year wedding anniversary with a vow-renewal ceremony in 2012. "Renewed our vows today….it's incredible to thank each other for the past year as husband and wife," Rimes tweeted at the time. "Here's to another great year!"

Four years after their 2006 Fiji wedding, Spelling and McDermott tied the knot once more during a ceremony at a private home overlooking Beverly Hills. "Beautiful day to remarry ;)" Spelling tweeted that same morning.

Sharing a photo of their sweet moment on Instagram in August 2021,Wahlberg wrote a touching tribute to his wife McCarthy on their seventh anniversary after surprising her with a renewal of their vows in their backyard.

"#HappyAnniversary Jenny! Seven years — no itch! I love you more than ever, Mrs Wahlberg," he wrote. "To be blessed with a partner whose goal is to make sure that I love myself more and more each day — is to be truly blessed. Thank you for holding me down, while always holding my kite string and letting me fly." 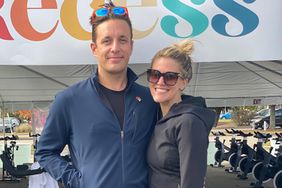