Cecilia Hart, the wife of James Earl Jones, died Sunday, Oct. 16, after a battle with ovarian cancer, WestportNow reports. She was 68.

They married in 1982, after playing opposite one another in a revival of William Shakespeare’s Othello that same year. They have one son together — Flynn Earl Jones.

Her Broadway credits include the revivals of The Heiress (1976) and Design for Living (1984) — and the premiere production Tom Stoppard’s 1977 play Dirty Linen & New-Found-Land, for which she was nominated for a Drama Desk Award.

On the small screen, she guest starred on episodes of Three’s Company, Quincy M.E., Charles in Charge, MacGyver and Law & Order.

Hart and Jones’ marriage was a second one for both — he was previously married to actress Julienne Marie and she to actor Bruce Weitz.

The pair were last seen on the red carpet of June’s Tony Awards.

The family requested that donations in her name be made to two organizations close to Hart’s heart: The Actors Fund or Hudson Valley Hospice.

A rep for Jones did not immediately respond to a request for comment. 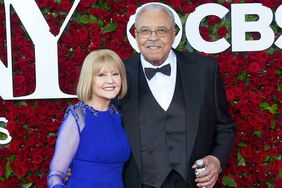