The Madagascar 3: Europe's Most Wanted photo call was a "wigged-out" event

It was a reunion of old (and news) pals when Ben Stiller, Jada Pinkett, Chris Rock and David Schwimmer gathered for the photo call for Madagascar 3: Europe’s Most Wanted at the Carlton Hotel in Cannes.

“Schwim,” Rock (who plays Marty the zebra) yelled when arriving at the same time as his Melman the giraffe costar. But it was Stiller who unknowingly doubled up on “Schwim” as his Alex the lion character photo-bombed the two as they made their way down the Croisette.

When the cast, which also included Jessica Chastain and Martin Short, walked out onto the terrace to be photographed, they were witness to throngs of screaming fans standing along wearing multi-colored clown wigs in anticipation of their arrival. Fitting since the animals join the circus in the film!

The cast waved and joked with each other, and Pinkett, in particular, lingered so photographers could grab an extra shot of her.

Cannes Film Festival: Behind the Scenes 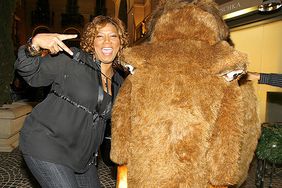