Though their relationship has been tense, the actress's mom says she's "ecstatic" her daughter is expecting

Tori Spelling’s mother, Candy, has commented for the first time about her daughter’s pregnancy – and she sounds like any proud grandmother-to-be.

“I’m thrilled and ecstatic,” she tells PEOPLE, “and if Aaron were here, I know how thrilled he would also be to share in such a happy occasion.”

Aaron Spelling – Candy’s husband and Tori’s father – died in June at age 83. On Tuesday, sources confirmed to PEOPLE that Tori is 14 weeks pregnant with her first child with husband Dean McDermott.

Candy Spelling’s comment could signal a thawing in what has been a tense relationship between mother and daughter. In June, Tori, 33, told PEOPLE she was upset that she first heard of her father’s death from a friend: “I was devastated. I thought I had some time (to see him). And I was saddened that the news had not come from my mother.”

Candy quickly responded with a statement reading, “We are deeply saddened that, during our time of loss and grief, we are forced to respond to the media frenzy caused by the mean-spirited and surprising comments made by Tori to the press.”

Tori Spelling Is Expecting a Boy

Tori Spelling Reconciling with Her Mom 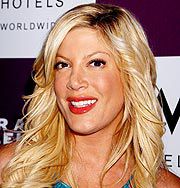