"Technically, the Democratic presidential contest is not yet over. But let's be real. It's over," says one political writer

Bernie Sanders‘ campaign is taking a “step back” after the Democratic hopeful lost his native New York to rival Hillary Clinton on Tuesday.

Pundits have all but declared the Democratic race over, and the fact that Sanders returned home to Vermont to take the day off on Wednesday – after his top strategist Tad Devine announced Tuesday night, “We’ll take a step back and then decide publicly what his intentions are” – doesn’t bode well for the Vermont senator’s presidential bid.

Nevertheless, Sanders supporters are still clinging to hope that he can defeat Clinton. So does the Democratic socialist still stand a chance of clinching the nomination?

Realistically? Not a chance, according to many politicos.

“Sanders won huge in the Mountain West and northern New England, and nearly all of the states in those regions have voted,” writes Josh Barro of Business Insider. “Saying Sanders can catch up means saying he can win California by 18 and Rhode Island by 33, after losing Arizona, Nevada, and Massachusetts. That’s not going to happen … Technically, the Democratic presidential contest is not yet over. But let’s be real. It’s over.”

In a New York Times article titled “Realistically, Bernie Sanders Cannot Afford Losses,” Nate Cohn writes that the senator “has thrived in caucus states, but there is only one of those left: North Dakota. Mr. Sanders could win 64 percent of the vote in a couple of mostly white Western primaries, like Oregon or Montana. But he’s unlikely to win by much more. He could win in Indiana, Kentucky and West Virginia, but is not likely to do so by 64 percent It is more likely that Mr. Sanders has reached the stage of the campaign where even feel-good victories – like repeats of his genuinely impressive win in Michigan – will leave him too far behind.”

New York magazine’s Jonathan Chait argues that Sanders now knows he won’t win the nomination and “it’s making him a little crazy.” “The Sanders campaign is decrying the system as rigged in various ways: the sequencing of states is unfair, the voting power of the ‘conservative’ South – but in reality, heavily Democratic and African-American – is unfair, closed primaries are wrong,” he writes. “Sanders’ denunciations of the primary system as rigged have merged with his descriptions of the economy and the political system as rigged. In combination with his attacks on Clinton for succoring Wall Street – which are exaggerated but not entirely imagined – Sanders has conjoined Clinton and the Democratic Party apparatus to the shadow nexus of villains that he and his revolution are pledged to overthrow.”

Basically, the chances of Sanders defeating Clinton are incredibly slim, especially without the establishment superdelegates, who are now upset that Sanders has forced the former secretary of state to squander millions better saved for the general election.

According to a new Associated Press survey, Clinton has won 33 new endorsements from superdelegates over the past month, while Sanders picked up just seven. “With her New York win,” the AP writes, “Hillary Clinton’s support among superdelegates puts her on a solid track to clinch the Democratic nomination outright before the national convention – even before results are known from the California primary, which Bernie Sanders was counting on winning to stand a chance.” 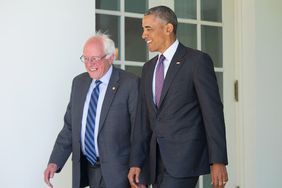