Calvin Harris says the dissolution of his 15-month relationship with Taylor Swift led to a “media circus,” putting his private life squarely in the public eye.

In the October issue of British GQ, Harris called the split from Swift – which was confirmed by PEOPLE in June – challenging.

“It’s very difficult when something I consider so personal plays out very publicly,” he told the magazine. “The aftermath of the relationship was way more heavily publicized than the relationship itself.”

Harris, 32, explained that he and Swift, 26, were “very careful” to keep their romance personal: “She respected my feelings in that sense. I’m not good at being a celebrity.”

“But when it ended, all hell broke loose,” he lamented.

The DJ, who was named the Patron Solo Artist of the Year at GQ‘s Men of the Year Awards on Tuesday, said some of his immediate actions after the breakup were, in part, due to the resulting attention.

In particular, Harris cited a few pointed tweets, written in July, about Swift’s involvement with his hit song “This Is What You Came For.”

“Now I see that Twitter thing as a result of me succumbing to pressure,” Harris told GQ. “It took me a minute to realize that none of that matters. I’m a positive guy.”

Related Video: Say It Isn’t So! Taylor Swift and Calvin Harris Call It Quits After 15 Months

The breakup, Harris explained, was something that needed to occur. “For both of us it was the wrong situation. It clearly wasn’t right, so it ended.”

Swift quickly moved on, striking up a romance with Tom Hiddleston. The pair have also called it quits after just three months together.

Harris has most recently been spotted out with Mexican actress and singer Eiza Gonzélez. “They have been talking and hanging out,” a source told PEOPLE. “It’s new.” 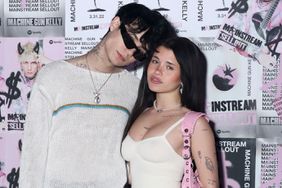