Bush to Address Nation on Katrina

Two days after accepting responsibility for the federal government’s sluggish response to Hurricane Katrina, President Bush is scheduled to offer its victims a new aid package during a national address Thursday night.

ABC, CBS, NBC and FOX have all adjusted their Thursday-night schedules to accommodate the president’s speech, which is scheduled to begin at 9:02 p.m. ET, the Associated Press reports. It is the first time Bush has formally addressed the nation since the hurricane struck more than two weeks ago.

Bush was expected to use the speech to announce a new federal aid package aimed at helping the storm’s victims rebuild their lives. Some of the components of the new plan reportedly include job training and housing for people and possible tax cuts for businesses willing to stay in the region. A CBS-New York Times poll released Wednesday indicated that most Americans are willing to help pay for such measures, AP reports.

The president is expected to deliver the speech from a symbolic location in New Orleans, the area hit hardest by Katrina, but the exact location hasn’t been announced.

The speech comes amid what is arguably the toughest crisis the Bush administration has faced. After winning widespread support following the terrorist attacks of 9/11, the president’s approval rating has plummeted for the government’s confused response to the aftermath of Katrina. Even members of the Republican Party are saying the president should have addressed the country immediately after the storm hit.

Meanwhile, things continued to look up in New Orleans, where Mayor Ray Nagin said that as many as 180,000 people may be able to return to the city within two weeks. He said the historic French Quarter, which didn’t suffer flood damage, might reopen for its residents soon.

New Orleans: 'Holding On by a Thread' 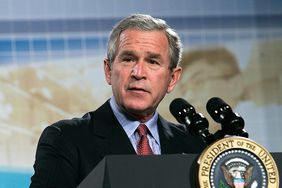