Recent bride and PEOPLE cover girl Sandra Bullock is proving to be the Miss Congeniality of coconut macaroons – handing out the cookies for free at Tuesday s grand opening of her sister’s Gesine’s Confectionary in Montpelier, Vt.

As might be expected, crowds showed up to gobble down the sweets as quickly as Bullock’s sister, shop owner Gesine Prado, could turn them out, reports the Associated Press from the bakery.

“These are my sister’s macaroons,” said Bullock, 41, outfitted in a white apron as two young children helped themselves to the cookies. “These are what she’s famous for.”

But Prado decided she wanted to try a new career and with her husband, Ray, bought a closed neighborhood market in January, converting it into a gourmet pastry shop and bakery.

As for having Sandra appear at the opening, “She’s just trying to help,” Prado said. “That was her decision to come. We didn’t want publicity.”

Macaroons weren’t the only offerings. There were croissants and other goodies, too. “Okay, we have three chocolate chip cookies. Big score!” Bullock said at one point.

Though she made it clear she wasn’t depending on the shop for employment, she did say she’d work occasionally. “Only when I need the money,” she joked.

Last month, Bullock married her tattooed beau Jesse James, the star of the Discovery Channel series Monster Garage, in a sunset ceremony at a ranch north of Santa Barbara. At the affair, sister Gesine, appropriately, made the four-tier wedding cake. 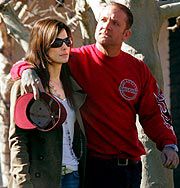 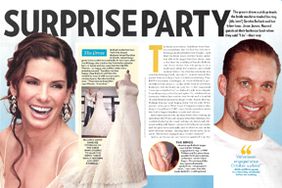 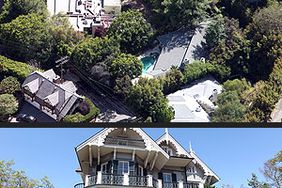 POLL: Where Should Sandra Bullock and Baby Louis Call Home? 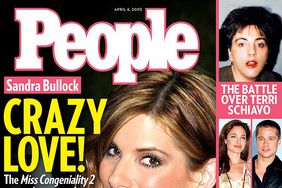