The couple break up after a nine-month romance, but sources say "both remain friends"

The romance between Bruce Willis and Brooke Burns is over, PEOPLE has learned.

Sources close to the actors say Willis, 49, and Burns, 26, the former host of NBC’s Dog Eat Dog, parted ways “within the last week or so,” and the split was amicable.

“It’s very difficult to maintain a relationship when they’re 3,000 miles apart,” one source tells PEOPLE, adding that “both remain friends.”

Meantime, Willis hasn’t wasted any time heading back into the spotlight. The actor was in Hailey, Idaho, over Memorial Day weekend spending time with ex-wife Demi Moore and their three daughters. On Sunday night he and his band, The Accelerators, took to the stage for a performance at the town’s Mint nightclub. (Moore and boyfriend Ashton Kutcher watched the concert while kissing and cuddling in a nearby corner.)

As for Burns, the actress has been in Hawaii since April shooting her new FOX series North Shore, which debuts June 14.

While much of the tabloid buzz has swirled around the romance of Demi and Ashton (Willis and Moore divorced in 2000 and share custody of their daughters), Willis and Burns quietly started dating last fall, after her 2002 divorce from Nip/Tuck actor Julian McMahon. She and McMahon share custody of a 3-year-old daughter, Madison. 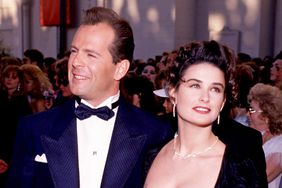