James Bond star Pierce Brosnan and TV journalist Keely Shaye Smith are planning to march down the aisle, PEOPLE’s “Scoop” column has confirmed. The two attended a press conference to save the whales in Baja, California, when Smith, sporting what appeared to be an engagement ring, was asked if a wedding was in her future. She replied in the affirmative, suggesting it might be soon. Brosnan mumbled a curt, “Thank you,” ending further discussion on the subject. PEOPLE has learned that Brosnan, 47, gave Smith the ring for her 36th birthday on Sept. 25. The couple, who met at a 1994 fund-raiser for Ted Danson’s environmentally helpful American Oceans Campaign, already have a 2-year-old son, Dylan. This will be Smith’s first marriage. Brosnan was married to actress Cassandra Harris, who died in 1991 of ovarian cancer. 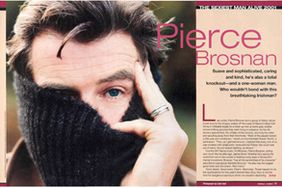 A Boy for Bond