Lawyers for Jamie Spears contend that Britney Spears‘s conservator case shouldn’t be transferred from state to federal court and that an attorney seeking the move doesn’t even represent the pop singer as he claims.

In court papers filed Tuesday, Spears’s father and the other temporary co-conservator of her estate, Andrew Wallet, called lawyer Jon Eardley’s highly publicized efforts to move the case “a brazen – but vain – attempt to strip a probate court of jurisdiction … by an attorney without a client.”

Eardley’s effort got a cool reception from U.S. District Judge Philip Gutierrez, who on Tuesday gave Eardley until Feb. 29 to argue why Gutierrez shouldn’t reject the request. If Eardley fails to make a good enough case by then, the matter stays in state Superior Court – with Jamie and Wallet remaining in charge of Britney’s affairs and $100 million estate.

“The jurisdictional allegations appear to be defective,” said the the judge in a tentative ruling.

Eardley was unavailable for comment. His spokesperson, Michael Sands, said on Wednesday that Eardley would file “overwhelming evidence” as to why the case belongs in federal court.

“Obviously the judge wants to see what we have expressed in our original papers,” Sands says, adding he sees Gutierrez’s request for additional documentation as a “great opportunity.”

Eardley has told PEOPLE that Britney – whose affairs have been overseen by the co-conservators since her hospitalization in a psych ward – is being “deprived of her Constitutional rights.” He says he’s seeking a “return to normalcy” when it comes to the singer’s living and legal situations.

But according to the co-conservator papers, a court has already found that Britney “lacks the capacity” to hire an attorney – Eardley or anybody else – and even if she did have that capacity, there are no legal grounds to move her case to federal court.

The papers didn’t say whom Jamie thought was behind Eardley’s involvement, but noted that Eardley’s spokesperson also represents Britney pal Sam Lutfi, now the target of a restraining order by the star’s parents.

Eardley, the papers allege, tried to do something similar in 2006 – allegedly seek to move a state case to federal court on behalf of a client he didn’t have – and was ordered to pay the other side’s attorney fees.

“Given his prior experience, Mr. Eardley should have been especially attuned to the impropriety,” the papers say. 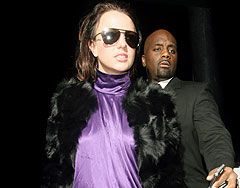