The 21-song show, attended by Katy Perry and Miley Cyrus, felt like a raging nightclub, with hard beats and lasers firing all different directions.

“I thought she killed it,” Jersey Shore‘s Pauly D said after the show.

Britney, herself, seemed to approve, Tweeting, “Wow perfect audience for the 1st #PieceOfMe show! That was AMAZING! I ❤ you Vegas!!!"

The “Perfume” singer spanned her many hits during the 90-minute show at Planet Hollywood’s Axis, covering ground from her Baby One More Time album through her current Britney Jean album.

Spears spoke sporadically, uttering a sentence or two between songs.

During “Freak Show” she asked for a “hottie” to be brought on stage, only to have her backup dancers snatch Mario Lopez from the crowd. Lopez was forced to crawl on the crowd while Spears pulled him with a leash. 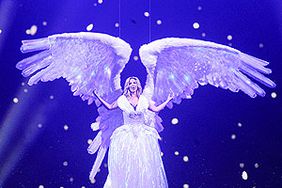 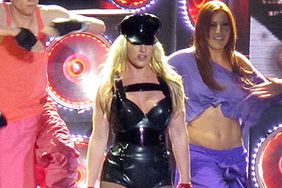