The singer instructs a group of kids aged 4 to 7, even plays pretend "choo-choo"

Britney Spears has class – dance class, that is.

The 26-year-old singer – who’s in the midst of a custody battle over her own kids, Preston, 2, and Jayden, 1 – logged some quality kiddie time Monday, teaching an hour-long dance lesson to a group of six children.

“She even played age-appropriate games in a circle, pretending to be a choo-choo train,” Baker said. “Britney was just amazing with the kids and everyone ended up having a blast. At the end of the hour class, all the kids hugged Britney and she seemed very happy.”

The kids, aged 4 to 7, were selected from the studio’s junior program. “The parents gave their permission,” Baker said. “They were thrilled. One parent summed it up: ‘It’s a once in a lifetime event.'”

Well, maybe not. Spears had so much fun, “She asked to please teach a class tomorrow,” said Baker, a longtime Spears friend. “We plan to put together a group of about 20 kids for her.”

After the class wrapped up at 7 p.m., Spears – who has rehearsed at Millennium three times since Friday – spent another hour and a half working on a dance routine for her single “Hot as Ice.”

“She seems very focused about getting back into her old life,” said Baker. “[She’s] focusing her energy on creating and dancing.” 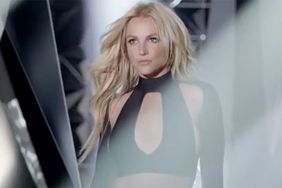 Dancing with the Superstar! Britney Spears Taught a Dance Class for Young Girls