Oops!... She Did It Again: Britney Spears Adorably Recreates Album Cover with Sons in Disneyland

Britney Spears gave in to nostalgia on Saturday, recreating her iconic Oops!… I Did It Again album cover with her sons when she came across a beaded curtain while in Disneyland.

In the sweet photo, Spears peeks through the beads while her sons with ex-husband Kevin Federline, Sean Preston, 9, and Jayden James, 8, flank either side of their mom.

“The boys and I doing our best #Oops album cover pose,” she wrote.

2000’s Oops!… I Did It Again was Spears’s second studio album, and featured the hit single, along with popular tunes “Lucky” and “Stronger.”

Spears and her family spent the Fourth of July at the popular California theme park, documenting the trip on social media.

In one photo, the star dons a floral peplum top, khaki shorts and a Minnie Mouse ears, as she, Sean and Jayden pose from a park ride.

“Happy 4th of July from the happiest place on earth,” she wrote.

Spears, who recently split from boyfriend Charlie Ebersol after an eight-month romance, previously opened up to PEOPLE about life as a single mom and her boys’ unique personalities.

“Preston is very opinionated, very expressive, and if he doesn t like something, he’s going to tell you,” she says. “But he has a huge heart, he’s a good kid and he has manners Jayden is sweet, very soft-spoken, kinda funny. He’s adorable – a momma’s boy.”

At Home with Britney Spears and Her Boys

Britney Spears Does the Dab with Sons Sean and Jayden 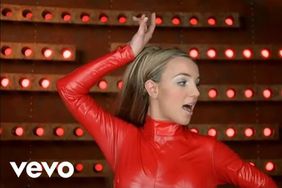