Britney Spears: Is She Getting a Las Vegas Gig?

The pop star is in "advanced" talks to host a residency at Planet Hollywood, a source tells PEOPLE

Britney may be coming to the Strip soon, y’all!

The pop star, 31, has been in negotiations to do a residency in Las Vegas the past several months, and now she’s one step closer to inking a deal.

A source close to the negotiations tells PEOPLE that there have been “advanced talks with Planet Hollywood for a Britney residency,” despite earlier reports that she wouldn’t headline at the location due to hypnotist Marshall Silver’s residency in March.

Those close to Spears, who split last month from fiancé Jason Trawick, are thrilled at her upcoming gig – including her new puppy Hannah, who Tweeted late Sunday, “Mommy, are dogs allowed to gamble in vegas? Gonna cash all my bones in for chips.” (Spears later Tweeted in response, “I don’t think so honey,” followed by the hashtag VivaLasVegas.)

While there have also been rumors about Spears hosting a residency at The Colosseum at Caesars Palace, sources have denied the reports to PEOPLE. 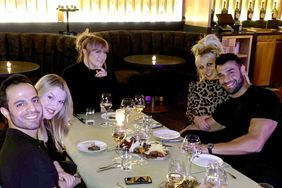