Twenty-four of music’s biggest stars have lent their voices to a new charity single in memory of the victims of the June shooting at Orlando’s Pulse nightclub.

The song was conceived by gay songwriter Justin Tranter, who has written hits for Gomez (“Good for You”), Stefani (“Make Me Like You”), DNCE (“Cake by the Ocean”), Justin Bieber (“Sorry”) and more.

The 36-year-old was inspired to write the track while volunteering at Orlando’s chief LGBT community center – The Center Orlando – a day after the attack.

“I called them and said, ‘If I fly up is there something for me to help with?’ ” he told Billboard. “They say, ‘We need as many hands as we can possibly get.’ ”

The June 12 shooting during Latin night at the gay nightclub in Orlando left 49 people dead and injured 53. It’s the deadliest shooting in American history.

Proceeds for the single, which is available on iTunes now, will be distributed by Equality Florida Pulse Victims Fund, the GLBT Community Center of Central Florida and GLAAD – going to aid families with medical care, counseling and education.

Among the other stars who appear on the song are RuPaul, Mary Lambert, Empire star Jussie Smollett, Prince Royce, MNEK, Alex Newell, The Trans Chorus of Los Angeles, Dan Reynolds of Imagine Dragons, Halsey, Juanes, Nate Ruess, and country star Ty Herndon. The artists recorded their parts from all around the world, Tranter told Billboard.

“Hands” is just one of several charity singles that have appeared in the wake of the Orlando shooting. Christina Aguilera released a song called “Change” nearly a week after the attack, with all proceeds going to those affected by the massacre. Three days after the attack, the Broadway community gathered together for a cover of “What the World Needs Now,” proceeds of which are going to the LGBT Center of Central Florida. 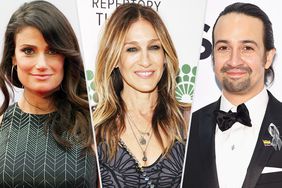