From family fun to spousal spats, see how things have changed for the Federlines since son Sean Preston's arrival. By Emily Fromm

Since son Sean Preston was born on Sept. 14, both Britney Spears, 24, and Kevin Federline, 27, have settled into the rhythms of new parenthood. Spears (left, shopping Jan. 10 in Beverly Hills) takes naps with her son, while Federline (carting groceries Jan. 1 in Malibu) "does change diapers," Spears's mom Lynne said recently.

After lunch, Spears hit the beach for a seaside swing. That night, she rang in the new year with Federline, who skipped a Las Vegas release party for his rap single, "PopoZão," to be with his wife and her friends at L.A.'s W Hotel (Sean Preston was with a nanny).

Vegas regulars Spears and Federline made Sin City family-friendly with Sean Preston and Spears's parents (Lynne and Jamie, left) and siblings in tow for the Consumer Electronics Show. There, Spears even told reporter Robin Leach, "I want more babies. I love being a mom."

The day after Christmas, Spears shopped in Malibu with brother Bryan (left) and sister Jamie Lynn. The singer had been looking forward to Sean Preston's first holiday: Back in November, she told PEOPLE, "I already started putting up a few of the decorations myself because I couldn't wait!"

Federline has experience in the fatherhood department: He's dad to daughter Kori, 3, and son Kaleb, 18 months (left, in Orange County, Calif.), with ex-girlfriend Shar Jackson. Is he ready for more kids with Spears? "We're going to wait," he told Ryan Seacrest recently. "(We have our) careers and first baby. You've gotta spoil the first one."

After a blowout fight that had Federline bolting to Las Vegas and Spears taking refuge at her mom's house in Louisiana, the couple patched things up – and showed a united front on their way to dinner in Los Angeles. "Britney really loves him," a source close to Spears told PEOPLE. "They're back together."

Federline's social life is a sticking point in the marriage, sources say: The aspiring rap star likes to party with pals and hit the links (left, near Malibu). But one friend insists he doesn't go out that much: "He prefers to stay at home with Britney and the baby."

For one busy weekend, the new parents took New York City by storm, hitting the nightclub Marquee and seeing the Broadway musical Sweet Charity. Spears was offered the title role in the show, now starring Christina Applegate, but she reportedly declined because she didn't want to uproot her family.

While in Manhattan, Spears was back to her girlish self, giggling about her new belly-button ring at the jewelry boutique Venus by Maria Tash (left) and then trying on hats at a street vendor. During her stay, she also shopped at clothing stores Forever 21 and Calypso.

Just a month after giving birth, Spears, who's been getting back in shape, looked well on her way to regaining her pre-pregnancy figure during a coffee run in Malibu. "My mom said after she had my brother that was the best her body had ever looked," she told PEOPLE in June. "Having a child inspired her."

Bringing home baby! Spears and Sean Preston (carried by a bodyguard, inset) arrived in Los Angeles after a visit to Louisiana. "She's really picky," new grandma Lynne Spears told Access Hollywood. "She doesn't let just anybody hold him, but she lets me."

The proud new parents beamed after lunch at Malibu's Moonshadows on Sean Preston's one-month birthday. For Britney, motherhood is a mission accomplished. "I can see myself as a mom," she told PEOPLE just days after her September 2004 wedding to Kevin Federline. "Next year at 23, I am so there."

Britney Spears and her babies (Sean and the pooches) 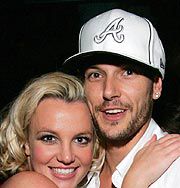 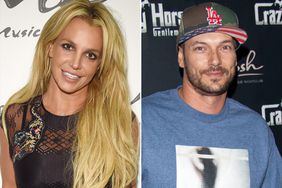