The couple's rocky year together in pictures, from her tears to his wild club nights. By Serena Kappes

The day before Britney Spears filed for divorce from Kevin Federline, the couple were apart yet again. Spears stepped out in New York City while Federline promoted his album Playing with Fire in Toronto on the Canadian music-video channel MuchMusic.

And when Federline hit the links in Toronto the same day, a polished-looking Spears paid a surprise visit to the Late Show with David Letterman. "I don't waste any energy thinking about these things. I don't get caught up in it," Federline had told PEOPLE recently about rumors of marital discord.

Spears was already turning out a new trim look – and going solo – in L.A. just a month after giving birth to her second son, Jayden James. She told PEOPLE she was slimming down "with a lot of cardio, Tae Bo, boxing ... a combination of everything." The next day, Federline got body-slammed by WWE wrestler John Cena – and got booed by the crowd.

At the MTV Video Music Awards, a pregnant Spears and Federline spoofed their parenting skills in a pre-recorded skit (ending with a faux Sean Preston driving away in a car). But the constant scrutiny they faced also took a toll. "It does affect you to a certain extent. It has to. When you've been poked at and poked at, there's going to come a time when you're going to snap," she told PEOPLE.

"I'm so proud of Kevin. He's been working on his own album since I got pregnant with Preston," nude cover girl Spears told Harper's Bazaar magazine in an interview in which she praised her husband. "I'm so lucky. He's a doll; he's adorable."

Federline filmed his "Lose Control" video at Pure Nightclub at Caesars Palace – and Spears cheered him on from the sidelines. Later, during a post-shoot celebration, when the deejay played Jay-Z's "Interlude" (including the lyrics "Got the hottest girl in the game wearin' my chain"), the aspiring rapper took the mic and rhymed a tribute to his wife: "I got the hottest girl in the game wearing my ring."

The couple – along with then 10-month-old Sean Preston – celebrated Father's Day weekend in Miami, where they rented a yacht and checked out Game 5 of the NBA finals. Even though Federline partied solo when he hosted a bash at South Beach hot spot Mansion, "he was on his best behavior," a clubgoer told PEOPLE.

A teary Spears insisted in a Dateline interview with Matt Lauer that her reportedly crumbling marriage was "awesome." When Lauer asked if Federline was living on the main floor of her home, not in the basement, as one tabloid reported, Spears responded: "Yes, of course. He helps me. He has to. I'm an emotional wreck right now."

A few months earlier, Spears had faced another emotional trial: A publicity firestorm following her drive with then-9-month-old Sean Preston in her lap as she fleed from paparazzi. "I did it with my dad. ... We're country," she told Lauer. But between accusations of her being an unfit mother and speculation about her relationship, Spears told him, "I've wept, yeah. I've definitely wept, with the world – how judgmental they are."

After weeks of not appearing together in public, the couple and Sean Preston took a stroll in Malibu. Of his negative press, Federline told Newsweek: "'He hates his children, he treats his wife like dirt, he gets high all day.' If I was that bad, you think anyone, let alone Britney, would put up with it?"

When Federline hit Las Vegas for a performance at Pure Nightclub, Spears was nowhere to be found. Her absence was made that much more obvious when Paris Hilton's mom, Kathy, grabbed a microphone in the VIP area and yelled, "Mrs. Federline, come up here! Britney!" After performing his song "America's Most Hated," Federline shouted, "Where my ladies at? I love the ladies!"

In happier times, Spears threw Federline several 28th birthday parties, including one at Atlanta club Vision. "He cares. He cares so much. His heart is awesome. He has a really big heart, and I love that," she said in June. And just recently, Federline told PEOPLE, "Our relationship is strong ... we are going to last a long time." 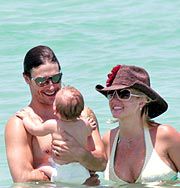 Britney & Kevin: In Their Own Words