Britney Spears is checking out of the Onyx Hotel – for now. On Tuesday, the pop princess pulled the plug on the upcoming leg of her North American summer concert tour due to a severe knee injury she suffered while shooting a video last week.

Spear’s Onyx Hotel show was due to continue June 22 in Hartford, Conn., and wrap up Aug. 15 in Bakersfield, Calif. She’d already played five weeks of dates in the U.S. and another six of Europe.

But Spears, 22, must now remain off her feet for six weeks with her knee in a hard brace, followed by at least eight to 12 weeks of rehabilitation, her Jive Records label said in a statement. As far as the canceled dates are concerned, the label said she “hopes to revisit those cities in the future.”

The entertainer had undergone arthroscopic surgery on her left knee in New York last Wednesday, after it gave out last Tuesday while she was performing choreography with rap star Snoop Dogg on a late-night video shoot in Manhattan for her latest single, “Outrageous” (the theme song to the new Halle Berry movie Catwoman).

“She obviously took a wrong step and blew out her knee,” a spokeswoman said at the time. “It was an old dance injury.” In March, Spears hurt her knee while performing in Illinois, forcing her to cancel some concert dates.

When the new injury occurred, Spears was taken immediately to an undisclosed local hospital, where doctors performed an MRI scan and found floating cartilage in her knee, Jive said. 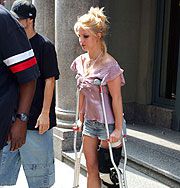