Though she put on a brave face at the American Music Awards on Tuesday, Britney Spears was upset by a skit that poked fun at her estranged husband Kevin Federline, sources tell PEOPLE.

“Britney was blindsided and upset,” says a source familiar with the situation. “Some (of Spears’s associates) were with her, and they were pissed. They asked that it not be shown on the (West Coast) feed.” (The skit was indeed broadcast on the West Coast.)

In the skit, AMA host Jimmy Kimmel packed a fake K-Fed into a box and threw him into the ocean, calling the hip-hop artist a “the world’s first ever no-hit wonder.”

Spears was introduced just moments later to present an award to Mary J. Blige. Onstage, she betrayed no anger about the incident. Instead, she smiled and waved and told the crowd, “I’m so happy to be here.”

A rep at Jive Records did not return calls. Federline’s rep declined to comment. (News of Spears’s reaction to the skit was first reported by E!’s Marc Malkin.)

Jimmy Kimmel said in a statement released Wednesday: “I knew they wouldn’t mind because I know they both have great senses of humor.”

Spears filed for divorce from Federline earlier this month after two years of marriage. Both Spears and Federline have asked for sole custody of their two sons, Sean Preston, 1, and Jayden James. 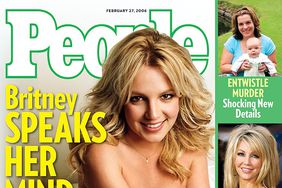 The 2 Sides of Britney

The Two Sides of Britney