A British commemorative stamp depicting Freddie Mercury, the late lead singer of the music group Queen, has drawn fire from critics who call it inappropriate for the Royal Mail to be featuring the flamboyant performer. “The queen we would rather see on our postage stamps is not stripped to the waist and wearing spray-on red trousers,” columnist Simon Heffer wrote in the tabloid Daily Mail. Others objected because a tiny portion of the stamp also shows Queen drummer Roger Taylor, which violates the Royal Mail’s rule that only members of the royal family are depicted on stamps during their lifetimes. 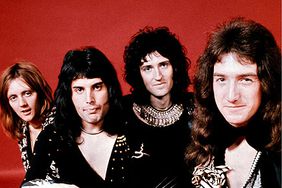 Queen to Appear on British Postage Stamps, Third Band to Do So After The Beatles and Pink Floyd