Bradley Cooper and Jennifer Esposito were married over the holidays in late December, their rep has confirmed to PEOPLE.

The wedding, just like their romance, was a low-profile affair. No details of when or where the ceremony took place were available. The two only announced their engagement in October.

It was a year ago, though, that Cooper, who turns 32 Jan. 5, and Esposito, 34, greeted each other with a kiss on the lips at the Warner Bros. and InStyle Golden Globes party. When asked if they were an item, Esposito told PEOPLE coyly, “I’m not answering that.”

Esposito starred in the 2005-06 WB series Related and last year won, along with her costars, a Screen Actors Guild award for best cast in a motion picture for Crash. She had an eight-month romance with Benjamin Bratt from 1996-97 and later dated All My Children actor Cameron Mathison.

Cooper got his big break in 2001, when he joined the cast of Alias, and in 2005 starred in the short-lived FOX sitcom Kitchen Confidential. He also appeared in last summer’s Wedding Crashers and performed opposite Julia Roberts on Broadway in Three Days of Rain.

This is the first marriage for both. 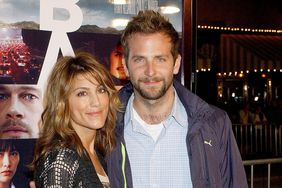