From Mr. & Mrs. Smith to their advocacy for women's health, see the lasting contributions the couple has made together

When Jolie wrote a powerful op-ed in the New York Times about her decision to remove her ovaries after early signs of cancer, Pitt rushed to be by her side. "I called my husband in France, who was on a plane within hours. The beautiful thing about such moments in life is that there is so much clarity," Jolie wrote. In 2013, when Jolie wrote about her double mastectomy, Pitt called her decision to undergo the surgery (and write about it publicly) "absolutely heroic."

Nicole Kidman was originally slated to star opposite Brad Pitt in the 2005 spy action flick but dropped out, leading to one of the sexiest on-screen romances in recent Hollywood history when Angelina Jolie signed on for the part.

What makes the couple proudest of all are undoubtedly the six children – including Maddox, Pax, Zahara, Shiloh, Vivienne and Knox – they've brought into their household. "We built a family," Jolie has said. "[Brad] is not just the love my life, he is my family. I hold that very dear."

In 2007, the couple worked together on the film adaptation of Mariane Pearl's memoir detailing the 2002 kidnapping of her husband, Wall Street Journal reporter Daniel Pearl. Jolie starred as the widowed Mariane in the drama, which Pitt produced.

Yes, the couple has earned the modifier "power" through their philanthropy, award-winning performances and overall influence, yet their immaculate, husband-wife fashion sense – especially when they're out together – makes them untouchable as Hollywood royalty.

Pitt and Jolie (by now both known to be keen on jewelry design) launched a capsule collection with high-end retailer Asprey in 2009. Called The Protector, the line featured serpent-inspired designs, and proceeds benefited Jolie's charity Education Partnership for Children of Conflict.

While they are independently passionate about their respective humanitarian causes – she on refugee issues and he on helping post-Katrina New Orleans – together through the Jolie-Pitt Foundation, they have donated millions of dollars toward efforts as varied as the treatment of HIV/AIDS, wildlife conservation and disaster relief.

Raise a glass to Jolie and Pitt! In March 2013, the couple released the Miraval Rose 2012, a rose wine produced at their French estate Chateau Miraval. Some 6,000 bottles – stamped with the Jolie-Pitt name on the back label – went up for sale online and sold out within five hours. The wine cost $139 for a six-bottle case.

While Pitt and Jolie have individually graced the covers of countless magazines, the couple topped themselves when they showed off the first photos of Shiloh in 2006, then twins Knox and Vivienne in 2008, on PEOPLE.

The Way They Were: A Look Back at Angelina Jolie and Brad Pitt's Past PEOPLE Covers 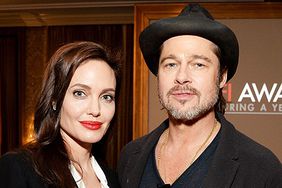