The power couple steps out for the Critics' Choice Awards

Brad Pitt and Angelina Jolie may have been a bit late for Monday night’s Critics’ Choice Awards ceremony in Los Angeles – but that didn’t stop them from stealing the show.

Once inside, the dapper duo held court at a front-and-center table, where they were deluged with admirers and Hollywood heavy-hitters during the commercial breaks.

Jolie, 32 – nominated for best actress for her role in A Mighty Heart and wearing a Dolce and Gabbana dress and Christian Louboutin heels – cozied up to Pitt throughout the meal.
– Lisa Ingrassia 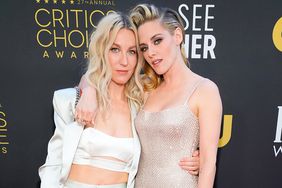