Don’t worry about Brad Pitt and Angelina Jolie. Hollywood’s hottest couple is not splitting up, their rep tells PEOPLE.

Rumors of a breakup are “not true,” says the rep.

Reports surfaced Wednesday that Pitt and Jolie, who are parents to six children, were planning to make a split “official.” The reports stemmed from a story in the National Enquirer.

Just last month, the couple made a glamorous appearance together on the red carpet at the Cannes Film Festival where Pitt’s new film, Inglourious Basterds, premiered. Jolie has also been filming her upcoming movie, Salt.
from Huffington Post
PHOTOS: Celebs In Sheer Dresses: Hot Or Not?
PHOTOS: The World’s Beautiful Older Women 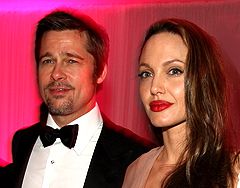