“I am missing some of my Boy Meets World family,” Strong, 33, told PEOPLE in a statement before his ceremony, which was held at a summer camp in Oregon on Sunday afternoon.

“That was my fault, [Danielle] chose the date first,” he added.

But despite missing some key members of his ABC sitcom family, Strong and his “partner-in-crime” Barreto, 31, tied the knot at a camp-themed weekend celebration complete with a ropes course, games and a talent show – the wedding party even slept in bunks at the campsite!

Ad while Strong feels “grateful” that the band Typhoon offered to play at the festivities after the actor tweeted his adoration of the group, there was one thing weighing on his mind as he headed toward the aisle: “Let’s hope it doesn’t rain too much.” 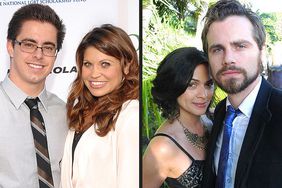