As he begins his court-ordered community service, the singer lashes out at the media

Boy George lashed out at reporters Monday morning less than an hour into his five days of court-ordered community service cleaning up the streets of New York City.

“You think you’re better than me?” George yelled at the gathered media as he swept trash and leaves off the sidewalk, the Associated Press reports. “Go home. Let me do my community service.”

Wearing an orange Department of Sanitation vest, dark Capri pants and none of his trademark stage makeup, the former Culture Club frontman (real name: George O’Dowd), 45, continued, “This is supposed to be making me humble. Let me do this. I just want to do my job.”

The singer was sentenced to community service after pleading guilty in March to falsely reporting a burglary at his Manhattan apartment – where responding officers found cocaine.

By June, George had not yet performed his community service, and was threatened with jail time by a judge at Manhattan Criminal Court.

On Monday, the singer’s manager, Jeremy Pearce, told reporters shortly after George arrived at 7 a.m. for his first day on the job, “He doesn’t show any kind of emotion about these things. He takes it in his stride. He doesn’t need to be humiliated. He’s a humble person.”

Luckily for George, on Sunday the Chinatown area where he is working held a “beautification day” in which some 250 young people cleaned streets, removed gum from sidewalks and swept up cigarette butts, the New York Daily News reports.

“We did a lot of the work for him,” Ping Ling, 19, of the Chinatown Youth Initiative, told the paper, “but it’s such a dirty place, after a few days, it is going to be dirty again.”

George was eventually reassigned to sweep a gated Department of Sanitation parking lot after the media surrounding him on the street caused too much chaos, but news crews crowded outside the fence.

He chuckled as he swept leaves toward photographers, Reuters reports. “My mum was a cleaner, my dad was a builder, you know what I mean?” he said. 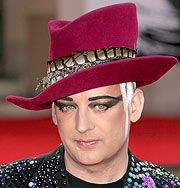 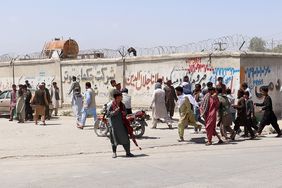 My Life in Pictures: Boy George

Boy George Flirts with Tragedy and Faces a Lawsuit