Bobbi Kristina Brown: Marriage to Nick Gordon Is 'Exactly What My Mom Wanted'

Looks like things are officially official between Bobbi Kristina Brown and Nick Gordon.

The duo confirmed their marriage to TMZ Friday – and said their union would have been late mom Whitney Houston‘s dream come true.

“I would tear up, this is exactly what she wanted, us together,” Brown, 20, said as she cuddled up to her new husband.

The coupling has long raised eyebrows due to the unusual connection between them: Houston raised Gordon like a son, although she never officially adopted him.

The pair did not address that connection in the video, but did share that they received a blessing from Brown’s grandmother, Cissy Houston, prior to the union. In 2012, Cissy was said to be “worried” about the pair together.

“We saw her at our cousin’s sweet 16 and she gave us her blessing,” Gordon explained.

Their comments come just one day after Brown posted a photo on Twitter and Instagram that confirmed the union, and showed off their wedding rings.

“@nickdgordon #HappilyMarried SO#Inlove if you didn’t get it the first time that is,” Brown wrote.

The newlyweds were coy when asked about the specifics of their nuptials, but hinted that a bigger celebration is to come.

“What we can tell you is that next year the ceremony will be beautiful,” Gordon said.

Plus, like any couple, they are planning on a honeymoon. 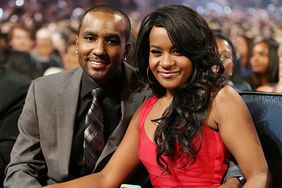