"Look, I bought her the ring in London," a squirming Simon Cowell tells Jay Leno

The famously cantankerous American Idol judge squirmed in his seat on The Tonight Show with Jay Leno on Monday as the host dissected reports of Cowell’s engagement to Idol makeup artist Mezhgan Hussainy.

“Are rumors you’re engaged true?” Leno asked. Cowell took a moment and responded carefully, “Are they true? Well, I do have somebody in my life now, Jay, yes. And I kinda made a decision this year to make somebody happy.”

As the audience cheered, Leno asked about the huge ring Hussainy has been sporting on her left hand.

“I thought she broke her arm,” Leno joked. Cowell responded, “It’s quite a big one, yes.”

When Leno called Cowell out for turning red, Cowell confessed, “I am blushing.” Leno asked, “Where did you, or may have, gotten engaged?” Cowell said, “I find this very uncomfortable. I was asleep, I think. No, look, I bought her the ring in London.”

Later, Leno spotted Hussainy, 36, in the audience and invited her to come on stage to join Cowell, 50. The pair looked giddy and comfortable with each other, said a witness. 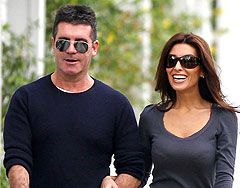