This is the second child for Tom DeLonge and his furniture-designer wife, Jennifer

The couple already have a daughter, Ava Elizabeth, who turned 4 on July 15.

The new arrival certainly won’t lack for proper furnishings. In January, Jennifer launched a line of high-end kids’ furniture that has won fans including Courteney Cox and Gwyneth Paltrow.

Ava is “our No. 1 tester,” Jennifer told PEOPLE in April. “She helps pick out colors – she’s a little artist.”

Friends since high school, Tom and Jennifer began dating in 1996 and married in 2001, a year after she received a B.A. in fine arts from San Diego State University and started a now defunct interior-design business.

“She’s always had such a desire to create and use her amazing mind,” Tom told PEOPLE. “That’s part of the attraction.”

Jennifer also supports her husband’s work: While pregnant with Jonas, she and Ava traveled by bus with Tom this spring as he toured the U.S. and Europe with his new band, Angels & Airwaves. 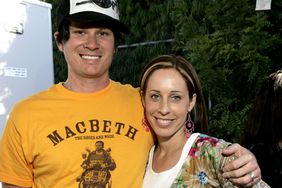