"They're friends," a source tells PEOPLE, citing distance and work commitments as factors in the breakup

Their summer romance is over.

Blake Lively and Leonardo DiCaprio, linked since May at the Cannes Film Festival, are no longer dating, a source close to DiCaprio tells PEOPLE.

First spotted together hugging on a yacht on the French Riviera, the pair also clocked time together at a Sydney, Australia, zoo, on bikes in New York City and on vacation in Italy over the summer.

Over the weekend, Lively, 24, was spotted in Boston with Ryan Reynolds, according to a report in the Boston Herald. The Gossip Girl star was reportedly spotted on the Acela train and, later, having dinner together at sushi restaurant, O Ya.

DiCaprio, 36, will next appear in J. Edgar, due out in November. 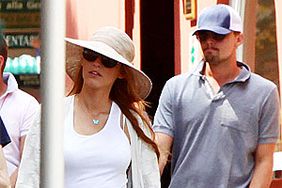 Leonardo DiCaprio and Blake Lively Hang Out in Italy

From Gisele Bündchen to Camila Morrone: All the Ladies Leonardo DiCaprio Has Been Linked to Through the Years

From Taylor and Tom to Drake and Rihanna: 12 Hottest Celebrity Summer Flings