A rep for both stars has confirmed their breakup.

Lively, 23, and Badgley, 23, have been linked since 2007, though they initially denied their romance, saying they were just friends and costars. Since 2008, however, the two have gone public with their relationship, appearing together at events and, often, hand-in-hand in New York City.

Most recently, the former couple went shopping for candles together at Henri Bendel in New York last weekend.

And on the set of Gossip Girl, there has been no sign of trouble. “It didn t seem like anything was off at all and no one said anything,” a source tells PEOPLE.

In September, the couple headed to the Toronto International Film Festival, where they each promoted new films, but scheduling conflicts kept them from each other’s premieres.

Badgley, who was there to promote Easy A, was unable to walk the carpet with Lively at the premiere of The Town, but he did offer his support and affection, telling PEOPLE, “Unfortunately, her premiere is, like, right now, otherwise, we would be at each other’s.”

Despite their often public displays of affection, the pair mostly remained mum about their relationship, with Lively telling Allure recently, “I don’t comment on my relationships. . . . My anonymity is something I treasure. Wanting to be an actor and wanting to be famous are different.” 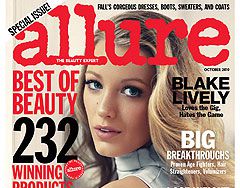