The prolific writer-director made The Pink Panther, Victor/Victoria and Breakfast at Tiffany's

Blake Edwards, the master craftsman who gave the world such stylish screen fare as Breakfast at Tiffany’s, The Pink Panther series with Peter Sellers, and Victor/Victoria with his wife Julie Andrews, died Thursday morning with Andrews and his grown children at his bedside, reports Variety. He was 88.

No further details have been provided.

Born in Tulsa, Okla., but with a grandfather and father in the Hollywood movie business, William Blake Crump (the name Edwards came later) practically had celluloid flowing through his veins. After graduation from Beverly Hills High and World War II duty in the Coast Guard, Edwards sold two scenarios for Westerns.

Even bigger breaks were still ahead. When leading man Dick Powell was looking for a new vehicle, Edwards wrote the Richard Diamond radio series for him. From there he moved into writing and directing more B pictures and TV series, including Peter Gunn and Mr. Lucky, both of which he created.

His strongest work, until a resurgence in the ’80s with S.O.B., ’10’ and Victor/Victoria, came in the early ’60s, when he directed The Days of Wine and Roses, a drama about alcoholism with Jack Lemmon and Lee Remick, and the first two Pink Panther movies with Peter Sellers.

After a stormy 14-year marriage to former actress Patricia Walker, Edwards directed Andrews – already the biggest musical box-office star on the planet thanks to Mary Poppins and The Sound of Music – in the lavish 1969 musical Darling Lili. Though critics and audiences were disappointed by the final product, “It seemed dumb not to admit we were in love,” Edwards told PEOPLE in 1977.

“I kept telling him it wasn’t going to work,” said Andrews. Yet the marriage endured, and the Edwardses lived an enviable lifestyle, with homes in Gstaad, Switzerland, and Malibu.

When he was presented an honorary Oscar in 2004, Edwards said at the podium: “Each and every one has contributed to this moment, friends and foes alike. I couldn’t have done it without the foes My father thanks you, my mother thanks you, the beautiful English broad with the incomparable soprano and the promiscuous language thanks you, and I sure as hell thank you.”

Besides Andrews, he is survived by a daughter, Jennifer, who is an actress; a son, Geoffrey, a writer, director and editor; Andrews’s daughter (with her first husband, designer Tony Walton), Emma Walton; and Amelia Leigh and Joanna Lynne Edwards, whom the couple adopted from Vietnam in the early 1970s.

“Do you know how long we’ve been married?” Andrews told PEOPLE in 2007. “Thirty-seven years. That’s staggering to me. Where did it all go? I cannot stress enough what a fine director he is – and not just because I’m married to him!” 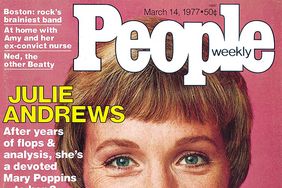 In 'That's Life!' Jennifer Edwards Relives Her Battles with the Film Director Dad Who Once Rejected Her

Thanks for the Melodies