Billy Bob and Angelina Are Wed

One week after a rumor surfaced that they had already done the deed, Oscar winners Billy Bob Thornton and Angelina Jolie really did tie the knot — in a simple, 20-minute ceremony Friday afternoon on the Las Vegas Strip. Greg Smith, owner of the Little Church of the West (the drive-up chapel where the two were wed), told the Associated Press that the bride and groom both wore blue jeans. This is the fifth marriage for Thornton, 44, and the second for Jolie, 24, who met while playing husband and wife in the 1999 comedy about air-traffic controllers, “Pushing Tin.” Thornton’s Oscar was for his 1996 screenplay for “Sling Blade,” which he also starred in and directed. Jolie won as best supporting actress this year, for “Girl, Interrupted.” 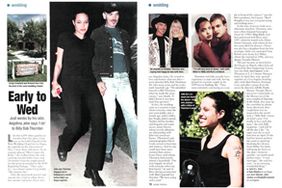