Bill Cosby Admitted to Sex with Teens, Said Agency Sent Five or Six Models to His Studio Each Week

Entertainer Bill Cosby admitted to having sex with at least two teen-aged girls and said an agency would send “five or six” models to his studio each week while he was filming one of his sitcoms, according to portions of Cosby’s deposition in a long-settled civil released by the Associated Press on the eve of a preliminary hearing on the lone criminal case against Cosby.

Cosby said he would give the struggling, young actresses a “very, very good meal” and described a sexual encounter he had with one of them in 2000, according to the transcripts from the depositions Cosby gave in 2005 and 2006 for Andrea Constand’s civil suit against him.

Q: She says that just days after … she told you that she did not drink, you told her to come over to (your townhouse) and served her amaretto. Do you recall serving her amaretto?

Q: That you told her to sit next to you on the couch and that you put your arm around her and began massaging her shoulder and arms suggestively. Did that occur? … This occurred sometime after you met her parents.

A: I need clarification on time.

He also discussed giving Quaaludes to Therese Serignese, who was 19 at the time he met her in 1976 and began a consensual relationship with her. She told her story exclusively to PEOPLE in November 2014 and is one of seven women currently suing Cosby for defamation.

Cosby says he gave Serignese money through his representatives at the William Morris Agency, which represented him at the time but no longer does, so his wife would not find out.

A spokesman for the agency, which is now called WME, had no comment. Neither did Andrew Wyatt, Cosby’s spokesman.

Cosby, 78, faces a preliminary hearing in Norristown, Pennsylvania Tuesday on charges he drugged and sexually assaulted Constand, now 43, at his Elkins Park, Pennsylvania mansion in January 2004. 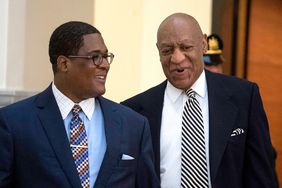