The Nashville singer marries his longtime girlfriend in an intimate ceremony

The morning wedding between Rich, 34, one half of the duo Big & Rich and host of CMT’s Gone Country, and Bush, a former model who runs a Houston modeling agency, was attended by about two dozen family members.

A reception for friends was held at Nashville’s Fontanel Mansion, former home of singer Barbara Mandrell, and also a location for the taping of Gone Country.

Rich and Bush have been dating for more than five years, but have kept their relationship under the radar, not appearing together at official events or on red carpets, says a source familiar with the couple. 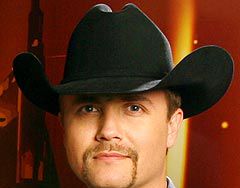 Get Ready for Big & Rich & Baby

Get Ready for Big & Rich & Baby