Beyoncé threw a decadent bash for her mom, Tina, in New Orleans on Saturday

Those Knowles women sure know how to make an impression!

And while celebrity guests like Kris Jenner and Jennifer Hudson immediately shared their candid snaps online, PEOPLE has the glamorous birthday gal’s favorite photo from inside the party, plus a rundown of what we common folk can learn from Mama Knowles and her party planners – daughters Beyoncé and Solange.

LESSON ONE: Don’t pimp out your guests. While the 200-strong party was filled with musical talent including Jay Z, Hudson, Monica, and Kelly Rowland, the night’s entertainment was provided by a band. Remember: your friends and family are there to have fun, not work! (However, as Miss Tina did, feel free to offer karaoke as an alternative for those who feel the urge to belt something out.)

LESSON TWO: Make an entrance. The House of Deréon designer arrived – with boyfriend, actor Richard Lawson, at her side – in a horse-drawn carriage. Enough said.

LESSON THREE: Choose a venue with personal meaning. Why New Orleans? Knowles traced her family’s roots to Louisiana, so the place has always held special meaning. In fact, Beyoncé has shot music videos there.

LESSON FOUR: Themes are in. Kaley Cuoco had a fire-and-ice-themed wedding and Knowles’ party was a masquerade ball.

LESSON FIVE: Add in some multimedia. During the party, a video her friends and family put together was played. The birthday girl’s granddaughter, Blue Ivy, may not have been in attendance (the party went from 8 p.m. until 2 a.m.), but we have a feeling she made a cute cameo! 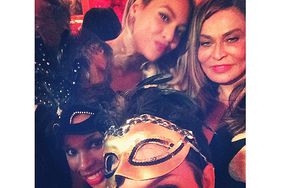