Solange! Gwyneth! See who turned up for their celebration

Beyoncé's sister Solange (in Catherine Malandrino) steps out from the singer's New York City apartment building, heading to the lavish post-wedding bash at Jay-Z's TriBeCa home Friday. According to a source, Beyoncé and Jay-Z wed that day in a small ceremony among close family and friends.

The Oscar winner arrives at the reception. And that man hiding his face? Reportedly her husband Chris Martin, who collaborated with Jay-Z on his 2006 album Kingdom Come.

Also wearing ivory – an apparent theme of the party – Rowland rolls up to the Tribeca building. The previous night, she and Destiny's Child bandmate Michelle Williams made a YouTube video, coyly hinting at their New York City visit.

The trio is complete! Williams – who recently unveiled her new single – comes to celebrate.

Dressed for the occasion, Beyoncé's dad joins the party. It's the second time he's been father of the bride – sister Solange married college football star Daniel Smith in 2004. (The two later split.) 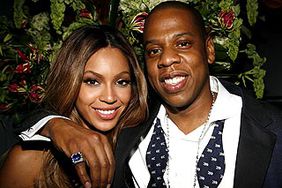