Did Beyoncé just call out Jay Z for cheating?

The Beyhive rumor mill went into overdrive after a video of the power couple’s June 28 concert in Cincinnati, Ohio, surfaced, showing the singer changing the lyrics to her 2006 single “Resentment.”

Another notable change? Beyoncé expanded on the lyric “I gotta look at her in her eyes and see she’s had half of me,” adding, “She ain’t even half of me. That bitch will never be.”

The couple, who married in 2008 and are parents to 2½-year-old Blue Ivy, have been taking the stage together for their On the Run summer tour.

Ever since footage surfaced of Beyoncé’s sister, Solange, fighting with her brother-in-law in an elevator in May, Internet speculation has been rampant about Jay Z cheating, but the couple have maintained a united front, stepping out together at a New Jersey Nets game five days after the tiff. Since then they’ve spent nearly every day together in rehearsals for the joint tour, which kicked off in Miami on June 25.

Check out the video of her performance below. 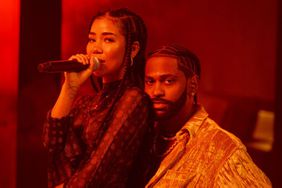