After calling out the young pop singer for being too sexual, Midler then labels herself "a reformed old whore"

Looks like Ariana Grande and Bette Midler have called a Thanksgiving truce.

Following Midler’s interview with the U.K. Telegraph on Monday – in which the 68-year-old Divine Miss M chided the 21-year-old pop star for being too sexual and said, “You don’t have to make a whore out of yourself to get ahead” – she apologized in vintage Midler style.

“About my screed on @ArianaGrande, all I can say is, ‘Spoken like a reformed old whore!'” Midler Tweeted. “She does have a beautiful voice, on a couch or off.”

Midler’s mea culpa follows a Twitter blitz from Grande, in which she stated Midler had always been a feminist “who stood for women being able to do whatever the F they wanted without judgment! Not sure where that Bette went but I want that sexy mermaid back,” Grande stated alongside a pic she posted of Midler as a mermaid.

“all love here,” she Tweeted, followed by, “and I will still quote first wives club every single day of my life lmao.” 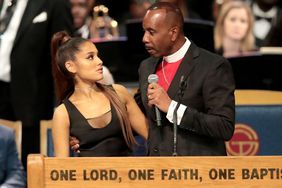 Feuds of the Year