From victory thrills to sad spills, see the most intriguing moments to come out of Turin. By Serena Kappes

It should've been her golden moment – but Sasha Cohen's two spills in her long program instead helped land a shocked Shizuka Arakawa, 24, in first place. The Japanese skater's nearly flawless performance to Puccini gave her country its first medal in Turin. Still, says U.S. silver-medalist Cohen, 21, "I'm really proud ... I didn't think I was going to get any medals."

Shaun White, 19, lived up to his nickname – The Flying Tomato – as the snowboarder defied gravity and won Olympic gold in the halfpipe competition with his consecutive 1080-degree jumps. What would make his victory complete? "I'm hoping Sasha Cohen digs gold medalists," the jubilant redhead told NBC.

There was no love lost between American speedskaters Chad Hedrick, 28 (left), and Shani Davis, 23. After they won the bronze and silver, respectively, in the 1,500-m. race, the tension thickened in a press conference, where Davis lashed out about Hedrick not shaking his hand after Davis scored gold earlier. Though they later shook, Hedrick – who was upset that Davis shunned the team relay – kept it in perspective: "We've never been buddies."

He may have finished fifth in the men's figure skating competition, but American Johnny Weir, 21, was unparalleled in his style, performing "Swan Lake" wearing feathers. Off the ice, he's just as fashion-conscious (he has 105 pairs of shoes) and even has a suggestion for the U.S. team uniform: "Rhinestones. And real fur."

If looks could kill, Italian ice dancer Maurizio Margaglio, 31, would be a dead man. When he lost his balance and took Barbara Fusar Poli, 34, down with him, her glare ignited the fiercest staredown in Turin. It wasn't until the next day (bottom) that the ice would melt, thanks to a clean program that landed them in sixth place. "We were angry at ourselves," said Poli. "But between each other, everything is okay."

Talk about an underdog: While all eyes were on Bode Miller to take gold in the combined Alpine skiing event, his disqualification, for straddling a gate, shot U.S. teammate Ted Ligety, 21, to the top – and into the spotlight. "It's great to be where I am," said the Park City, Utah, native, who'd never before won a major race. "But it's unexpected, that's for sure."

They'd skated a graceful original-dance program, but it all came to a crashing halt when Canadian ice dancer Marie-France DuBreuil, 31, lost her grip on partner Patrice Lauzon, 30, during a lift. She left the stadium grimacing in pain on a stretcher, and her muscle injury prevented the pair from completing the competition. "We were so close to our goal," she said. "To our Olympic dream."

"I made a mistake. It happens," U.S. snowboardcrosser Lindsey Jacobellis, 20, said, shrugging off a mountainload of criticism after losing a sureshot at the gold. Her slip-up? Adding a just-for-show trick – which caused her to crash. But Jacobellis, who came in second to Switzerland's Tanja Friedan and still has endorsement deals, says it's all good. "I had a blast."

When Chinese pairs skater Zhang Dan, 20, fell and hurt her knee at the start of their final routine, it seemed their Olympic dreams had been dashed. The music stopped, and she was limping. But with true grit, and just minutes later, she and partner Zhang Hao, 21, were back on the ice and winning the silver medal – and the hearts of everyone watching.

American speedskater Joey Cheek, 26, wasn't the only winner when he scored a gold medal in the men's 500 meters: He announced that he'd donate the $25,000 bonus (and the subsequent $15,000 for his 1,000-meter silver medal) to Right to Play, a group that provides sports for children in poor countries. "I don't really need it," he said of the cash.

Olympic skating champ Michelle Kwan, 25, tearfully withdrew from her final shot at a gold medal because of a groin injury. But her move opened the door for a fresh face: alternate Emily Hughes, 17 (whose sister is gold-medalist Sarah). "It's been a whole whirlwind," said Hughes, who finished in seventh place in her first international competition. "I really enjoyed every minute of it." 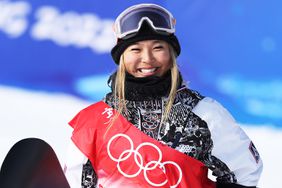 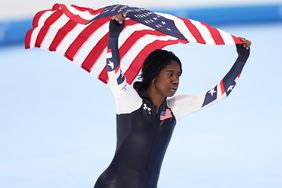