Sure, the Oscars are all about gorgeous gowns and dazzling diamonds, but it's often the hairdos that steal the show – for better (as in Jennifer Lopez's case) or for worse. See which Oscar 'dos took home gold this year, and which fell flat.

HEAD OF THE CLASS

She often ignites the red carpet in off-the-wall outfits and equally out-there 'dos. But at the 2003 Oscars, Jennifer Lopez goes for elegance with a 'do that's simply divine.

All this, and talented to boot! Best Actor winner Adrien Brody (for The Pianist) graces the 2003 Oscars red carpet with hair that's sleek yet hip, tousled yet coiffed. A+!

How does she do it? Best Supporting Actress winner Catherine Zeta-Jones (for Chicago) not only pounded out a number from her Oscar-winning film but looked pert and pretty in the process – all while eight months pregnant! She tops it off – literally – with a sleek, simple and elegant 'do. Bravo!

Matthew McConaughey sure knows how to flaunt that beautiful hair. At the 2003 Oscars, the star of How to Lose a Guy in 10 Days wears his waves with just the right amount of slickness – all the better for bringing out those piercing eyes.

Oh, Cameron! Why would you cover up that pretty face with a limp, dull 'do that just hangs there? Maybe the devil-may-care look works for a night out clubbing, but it is completely wrong for Hollywood's swankiest evening.

Yikes! It appears Colin Farrell neglected to look in the mirror before heading out the door for the Oscars. His spiky, over-gelled hair is just a mess, and terrible as a tux-topper.

With more than 30 years of moviemaking under his belt, you would think that Harrison Ford would have learned a thing or two from assorted on-set hairstylists. Think again. At the 2003 Oscars, his 'do is overblown, overgelled and downright overdone.

Is Calista Flockhart channeling Medusa? The spirals atop her head were meant to be soft but instead look super-stiff, and they clash with her delicate pink gown.

#TBT, Oscars Edition: The Killer Red Carpet Moments You May Have Forgotten -- But Have to See 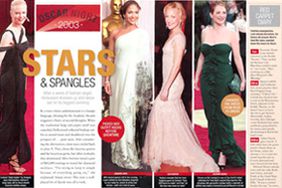 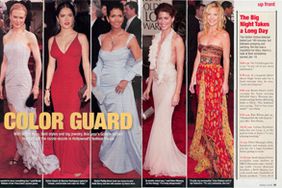 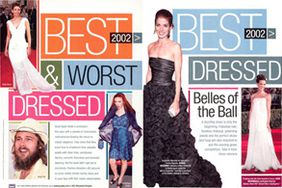 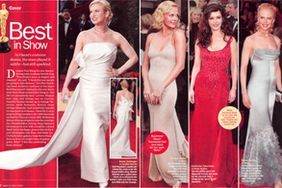