No one knew exactly what to expect this year in terms of Oscar fashions – and while some stars didn't disappoint, gracing the abbreviated red carpet in gorgeous gowns, others made us cringe with their fashion faux pas. Take a peek at the creme de la creme and the bottom of the barrel in our special gallery.

Glamor is clearly the order of the day for Best Actress nominee Renée Zellweger (for Chicago), who looks ravishing in this red gown. The sparkling, cutout lace top complements both her alabaster skin and slender figure, while the skirt pours gracefully down onto the red carpet. She tops it all off with simple blonde locks and perfect ruby lips.

Black is anything but basic on nominee Nia Vardalos (for Best Original Screenplay for her sleeper hit My Big Fat Greek Wedding). The gathered top and sheer sleeves give way to a long skirt with a beautiful pleated train, creating a regal look.

Double nominee Julianne Moore (as Best Actress for Far From Heaven and Best Supporting Actress for The Hours) is stunning in a strapless, flowing jade gown that sets off her auburn hair and fair complexion. Sparkling chandelier earrings and understated makeup complete the look.

Best Actress nominee Salma Hayek (for Frida) is a traffic-stopper in a gown that's both daring and demure. The top is a sexy web of sparkling black lace that hugs her enviable curves, while the long, full skirt is an elegant ivory sweep.

She's not up for an award, but Kate Hudson positively glows in this flesh-toned lace number that fits her slim form like a glove then opens to a full skirt at the bottom. She tops it off with spectacular diamond earrings and a loosely pulled-back, soft blonde 'do.

Oscar winner Marcia Gay Harden (as Best Supporting Actress for 2000's Pollock) recalls the colorful glamor of yesteryear in this stunning aqua gown with its gathered top, single off-the-shoulder strap, form-fitting bodice and flowing skirt. She pulls off the daring color with confidence and grace.

She's a winner all around. Nicole Kidman, who took home this year's Best Actress honor (for her turn as Virginia Woolf in The Hours), also gets the prize for her enduring fashion sense and perfect poise. Kidman dresses her statuesque frame beautifully in this unusual black gown, with its multiple wrapped pieces and bold straps.

Oscar winner Julia Roberts (for 2000's Erin Brockovich) is a tall, cool drink of water at the 2003 Academy Awards. Her halter dress dips low enough to be daring but not too baring, and the gathers accentuate her slim waist. Add to that a delicate gold drop necklace and her signature megawatt smile, and you get a dazzling Oscar-worthy look.

Normally, Heather Graham shows off her curvy figure, but at the Oscars, the actress shot for a more demure look. Unfortunately, she missed. She's swimming in her dowdy black gown, with its jacketed bodice, lacy midsection and crinkly hem.

Instead of flattering her figure, the bodice of Alias and Daredevil star Jennifer Garner's spaghetti-strapped, baby-blue gown flattens her and squashes her bust. It takes away from a flowing train that could have made the beautiful actress look elegant.

Apparently, Hilary Swank couldn't decide whether she wanted to wear a minidress or a full-length gown to the Oscars, so the Best Actress winner (for 1999's Boys Don't Cry) opted to don a combination of both – a short pink dress with a tulle overlay. It was definitely not a good choice for the usually dazzling actress.

When she's acting, Meryl Streep – who got her 13th Oscar nomination this year as Best Supporting Actress for Adaptation – can't hit a wrong note. Unfortunately, the same can't be said of her style selection at the Academy Awards, a silky, strapless black gown festooned with tacky fringed silver sleeves. The screen icon deserves a more fabulous frock.

Daniel Day-Lewis has always followed the beat of his own drummer, and clearly the same is true for his unique fashion sense. But sometimes that can backfire – as it did at the Oscars. The Best Actor nominee (for Gangs of New York) looks more comical than cool in his gray tuxedo and tilted bow tie.

With his ruffled shirt and too-tight cummerbund, Bono is bursting at the seams. It's safe to say that the rocker-political activist – a Best Song Oscar nominee with his U2 bandmates for Gangs of New York's "The Hands That Built America" – won't be adding fashion designer to his already full resume. 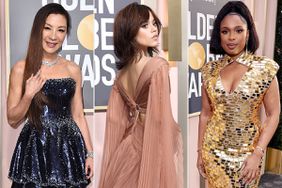 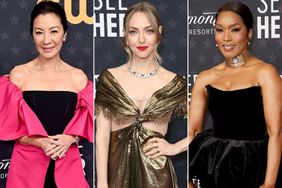 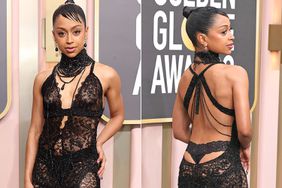 Liza Koshy Brings Back the Exposed Thong Trend at the 2023 Golden Globes — See Her Daring Look! 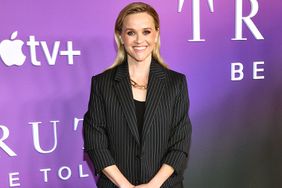 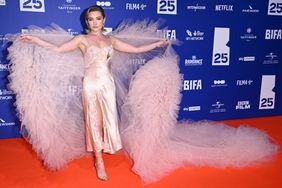