16 of the Most Glorious Moments in Kiss Cam History

Nothing beats the sweet, sweet taste of kiss cam victory.

Here, we recognize some of the greatest achievements in kiss cam history with a series of highly competitive superlative awards. Remember: If you practice really hard and believe in yourself, one day you, too, can go down as one of the best cam-kissers of all time.

Even though he wasn’t technically under the direction of a kiss cam, newlywed Justin Bieber decided to show the Jumbotron some romance when he and wife Hailey Baldwin were put on the big screen at a Toronto Maple Leafs game on Saturday. There were approximately zero eyes on the ice as the singer passionately kissed his bride for the cameras, making his marriage’s open PDA policy abundantly clear.

Last year, Jennifer Lopez and Alex Rodriguez drew boos from the crowd at a University of Miami Hurricanes vs. Virginia Tech Hokies game when they failed to obey the kiss cam. Thankfully, the power couple redeemed themselves at a January 2017 Miami basketball game — playful slap included.

Way back when, Selena Gomez’s jaw was thoroughly dropped when the cam targeted her and then-flame Justin Bieber as the Lakers took on the Spurs. Warning: Video may cause secondhand blushing.

When her foolish date refused to kiss her on the Atlanta Hawks’ cam, this hero of a woman did the noble thing and ditched him for a neighbor who had his priorities in order. “A Tale as Old as Time,” indeed.

After giving her father a quick peck at a New York Mets game, Amy Schumer turned to then-boyfriend Ben Hanisch for a full-on kiss cam makeout. With the spirited smooch, Schumer and Hanisch proved that nothing comes before putting on a good show for the cam — even avoiding your father’s embarrassment.

As these two young sports fans learned, romance does not always go as planned.

Knowing the kiss cam would be on the prowl during a Minnesota Gophers Valentine’s Day game, fan Adam Martin came armed with a “My Sister” sign to avoid any confusion. “He always was a planner,” Martin’s sister Maria told PEOPLE at the time. “He brought the sign as a joke. He didn’t want people to think I was his girlfriend … Older brothers are so embarrassing.”

It takes a pro like Ashton Kutcher to effortlessly swing a cap back for a cam-pleasing kiss.

And Kutcher’s attempt to go French on wife Mila Kunis earned him yet another place in the Kiss Cam Hall of Fame.

Then-President Barack Obama and First Lady Michelle warmed icy hearts across the world when they were caught on the cam at a 2012 Olympic basketball game. The kiss wasn’t so steamy that daughter Malia needed to cover her eyes, but was passionate enough to prove the presidential couple knows how to put on the romance. Now that’s bipartisanship.

Never has a more genuine expression of love been caught on stadium cameras.

Cameron Diaz has many talents, and among her most impressive is the ability to make out with husband Benji Madden on the kiss cam without spilling her beer. Truly inspirational.

Will Ferrell’s wife, Viveca Paulin, was having none of it during an L.A. Kings game. She jokingly employed an expert kiss-evading technique before giving in to the cam.

While a couple got affectionate in the seats below her, this video-bombing spectator showed the Atlanta Hawks kiss cam a thing or two about real love. Greasy love. Pizza love.

David Beckham‘s daughter Harper was adorably fascinated she and her father were put on the big screen at a hockey game. Honestly, who wants to watch grown men hit a puck when there are cutie pies like this around?

These people should’ve paid better attention to Cameron Diaz and Benji Madden. Luckily, only less than half a drink was harmed in the making of this tragic (yet hilarious) kiss cam moment. 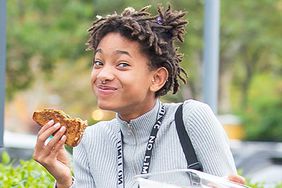 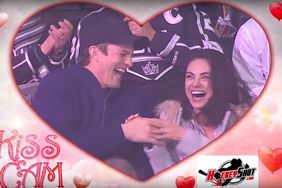 The Celeb Guide to … Nailing Your Kiss Cam Moment