Benigni: Where Is He Now?

Last year’s clown prince of the Oscars, Roberto Benigni, has been keeping a low profile of late. The “Life Is Beautiful” Italian auteur, who was named best actor a year ago (his movie, which he also wrote and directed, won as best foreign language picture), spent most of 1999 publicizing the film and shaking hands — and monkeying around — with world leaders, including the Pope and the Clintons. New York’s Daily News reports that although Benigni has been flooded with scripts from hopeful producers, the wild-haired star, 47, intends to start writing his own new script just as soon as he’s home from being a presenter at this year’s Oscars. 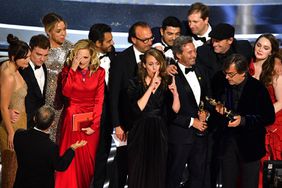