"She's going to be getting a lot of baby Red Sox gear," friends tell PEOPLE

Not long after Violet Anne Affleck came into the world on Dec. 1, pals of her famous father were making sure she got his religion: baseball, that is.

“We’re going to raise this baby right,” Marc McGovern, one of Ben Affleck’s oldest buddies from his hometown of Cambridge, Mass., tells PEOPLE. “So she’s definitely going to be getting a lot of baby Red Sox gear in the mail from me.”

She may have been born in L.A. – a continent away from Fenway Park or the hills of her mom’s home state of West Virginia – but the firstborn child of Affleck and Jennifer Garner, who weighed in at 6 lbs. 14 oz., is destined to trace her roots back East.

Meanwhile, her parents are already at home in their new roles as Mom and Dad. “Ben has been changing diapers. He’s an amazing father,” says a friend of the couple’s. “I don’t know if I’ve ever seen anybody happier. He’s already wrapped around Violet’s little finger.”

Violet, whom their pal describes as “beautiful – you instantly fall in love with her,” arrived just a week after Garner and Affleck, both 33, shared Thanksgiving at their Brentwood home with her parents. After a complication-free delivery at an L.A. hospital, Violet (a Garner family name) was born at 3:26 p.m. Pacific time. The couple, who wed in June in the Turks and Caicos islands after dating for a year, brought her home three days later.

As for Garner, already known as something of a den mother on the Alias set, where she often brings homemade brownies, “she’s an amazing mom,” says the friend. Needless to say, both are overjoyed. “You took two of the best people, who have the most love and affection for each other, and just when you think the ultimate is the two of them finding each other, this little girl came into their lives.”

For more on Ben & Jen’s bundle of joy, pick up the latest issue of PEOPLE, on newsstands Friday.

WEEK IN REVIEW: Richie's Engagement Off 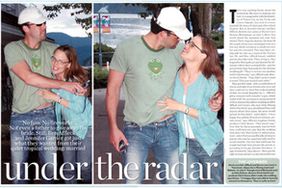