Ben Affleck's former nanny stopped for gas in her brand new Lexus after visiting her parents in Newport Beach, California

While Ben Affleck hangs out with his kids in Atlanta for his 43rd birthday on Saturday, the family’s ex-nanny continues to live it up on the West Coast.

Despite the media frenzy surrounding Christine Ouzounian, who’s found herself at the center of infidelity rumors surrounding Affleck and Jennifer Garner‘s divorce, the former nanny is keeping active.

The 28-year-old SoCal native was spotted out again on Thursday, filling up her brand new Lexus convertible while on the way back from her parents’ house in Newport Beach. The unemployed nanny had her blond hair down and was wearing denim shorts, a long-sleeve black shirt and aviator sunglasses.

A source close to Affleck told PEOPLE the Batman v Superman: Dawn of Justice star did not foot the bill for her fancy new ride.

Affleck, who denies any infidelity, has also cut off contact with Ouzounian, according to his friend. “They are not in communication. They are not talking,” the source said. However, a friend of Ouzounian told PEOPLE last week that Affleck and the ex-nanny are “in touch every day, all day long.”

Meanwhile, Affleck, who a friend said is “trying to ignore the circus,” is enjoying his birthday weekend with his kids, Violet, 9, Seraphina, 6, and Samuel, 3.

“He’s happiest when he’s with his family,” said a close friend.

Jennifer Garner and Son Samuel, 10, Are All Smiles as They Ride in Fourth of July Parade: Photo 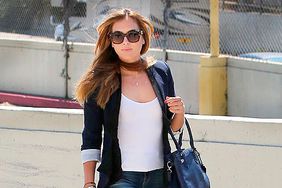 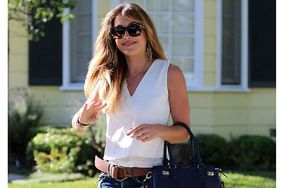