Why Are Millions of People Tweeting #BellLetsTalk?

Sorry Kanye West, but #BellLetsTalk is the most important thing happening on Twitter right now.

The hashtag has been tweeted by millions as part of a movement to open up conversations around mental illness and bash stigma for those suffering from depression, O.C.D., anxiety and more.

Started in 2010, Bell Let’s Talk Day is an initiative meant to promote public discussions around mental health. Bell donates 5 cents for every call and text made on its network on Jan. 27th, as well as for Facebook shares and tweets using the hashtag. According to CBC, Bell has donated over $73 million to mental health initiatives throughout Canada.

“It has drawn an unprecedented national spotlight on the subject of mental illness itself,” Dr. David Goldbloom, a psychiatrist and senior medical adviser at the Centre for Addiction and Mental Health, told CBC. “We can look at other health causes like HIV or breast cancer, where the conversation went from silence to open talk. I think the same is happening now with mental health.”

On Wednesday, millions took to Twitter, Facebook and other social media platforms to tweet about the issue, opening up about their own struggles with mental illness and the importance of having a conversation about it. Stars like Ellen DeGeneres, Alice Cooper and Michael Bublé tweeted the hashtag, and Nelly Furtado – among thousands – opened up about her own personal experience: growing up with OCD.

“We turn up the mental health volume on Bell Let’s Talk Day, letting all those who struggle know they have our support and can reach out for help without fear. At the same time, Bell increases its funding of Canadian mental health programs with each message of support you send,” said Clara Hughes, a six-time Olympic medalist and national Bell Let’s Talk spokesperson. “I am so excited to be part of the incredible journey to making Canada a nation free of the stigma around mental illness.” 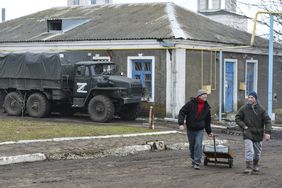 The Letter 'Z' Suddenly Seems Like It's Everywhere in Russia: What Does It Mean?