Take a peek backstage and inside the PEOPLE/Entertainment Industry Foundation afterparty as stars honor each other at the Screen Actors Guild Awards. By Beth Lipton

Fellow Garners (though they're not related) and SAG winners Jennifer (as best actress in a TV drama for Alias) and James (for lifetime achievement) congratulate each other backstage. Upon receiving her award, Garner said, "The day my parents accepted I was an actor was the day I told them, 'I get insurance.' "

Desperate Housewives stars Teri Hatcher (who took the best comedy series actress prize as well as one for being part of the winning ensemble cast) and Nicollette Sheridan celebrate at the PEOPLE/Entertainment Industry Foundation SAG afterparty. Two bands entertained the stars at the fete, held in a 12,000-sq.-ft. tent behind the Shrine Auditorium and decorated in a '60s theme with 40,000 polka dots accented by 70,000 yellow Ecuadorian roses.

Finding Neverland costars Johnny Depp and Freddie Highmore (SAG nominees for best film actor and supporting actor, respectively) show their good sportsmanship after losing out to Jamie Foxx and Morgan Freeman. Depp, who is also up for a Best Actor Oscar, will team with Highmore again in Charlie and the Chocolate Factory.

Fellow best dramatic film actress contenders Catalina Sandino Moreno (for Maria Full of Grace) and Kate Winslet (for Eternal Sunshine of the Spotless Mind) were bested by Million Dollar Baby's Hilary Swank, but both will have another shot at a statuette at the Oscars.

THEY'LL TOAST TO THAT

It's all about the love for Desperate Housewives stars (from left) Felicity Huffman, Marcia Cross and Eva Longoria, who nabbed the prize for best comedy ensemble cast (along with Teri Hatcher and Nicollette Sheridan).

Aviator star and SAG hopeful Leonardo DiCaprio lost the best film actor prize to Ray's Jamie Foxx, and the ensemble cast awards went to Sideways. So, why do he and costar John C. Reilly look happy? Perhaps their good cheer is for fellow star Cate Blanchett, who won the best supporting film actress prize – or maybe they're revving up for the Oscars, in which the movie is up for 11 awards, including Best Actor for DiCaprio. 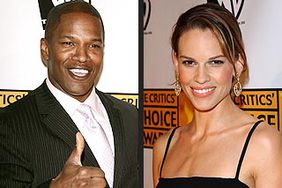