Beatles Back in Action

Forget Jar-Jar Binks. It’s time to make room for Jeremy, the Nowhere Man. Remember him? The nebbish who helped save the Beatles in their 1968 animated feature “Yellow Submarine”? Well, Jeremy, along with John, George, Paul and Ringo — as well as a Blue Meanie (the “Yellow Sub” villain) — will be available as five-inch action figures this September, produced by Todd McFarlane, creator of “Spawn” comics. PEOPLE Online contributor Rhonda Markowitz reports that the little plastic Beatles’ invasion accompanies a re-release of the psychedelic movie. Old Fred, the captain of the sub, will also be available. 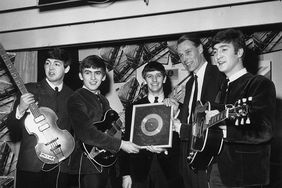 The Fifth Beatle: 9 of George Martin's Greatest Hits with the Fab Four